Buddy has now been adopted.

Buddy is a 20-month-old neutered Labradoodle. He is a large dog at around 35 kilos in weight & 27 inches to the shoulder. He is a big strong leggy lad with no idea of his size & power.

Buddy has a wiry coat that is slightly longer at the front & he sheds LOTS of hair. His coat doesn’t need much attention beyond a brush a couple of times a week. He enjoys being showered & loves catching the water out of the garden hose in his mouth. He is fine with the blaster.

Buddy is clean in the house & lets you know he needs to go out by standing by the back door.

Buddy has not been tested indoors with cats. On walks when he has seen a cat so long as it is still, he has shown little interest. He has been more interested if the cat has been on the move & would chase if he could. He has chased birds & regularly tries to catch flies & wasps! Therefore, I’d expect him to be better without a cat in the family.

Buddy is a very affectionate & loving boy. He loves soft toys & will often greet you with a teddy in his mouth & a waggy tail & he loves to rummage around in the dog toy box.  He’s full of mischief in the funniest of ways & will pinch dirty socks & underwear & charge around the house with them in his mouth. He loves picking pockets for the remains of treats or face masks & likewise loves a rummage around in handbags.  He doesn’t eat or ingest these treasures – just likes to carry them around in his mouth. He is always happy & has a waggy tail.

Buddy travels well in the car although often particularly at the start of a journey, he prefers to stand up in the boot rather than sit or lie down.

Beyond de-squeaking a few soft toys & chewing buttons off a duvet cover, there have been no destructive behaviours in foster. However, things left around can be fair game & care will need to be taken to ensure nothing dangerous or precious is left laying around. Buddy has access to several extra-large stag bars to keep his jaws appropriately occupied. And an extra-large KONG filled with treats from time to time.

Buddy does not use or need a crate & indeed became very distressed when crated when he first came into foster. He isn’t keen on dog beds with sides on them but is happy with a piece of vet bed or a pad to lie on.

Buddy loves his food & eats his meals politely. He is prone to staring & swiping at you with his paw if you are late with his dinner. He eats a grain-free fish kibble & is partial to some sardines on top from time to time. Whilst Buddy tends not to scrounge when we are having our meals, he has been known to take food from the worktop & bin - although he has never done this while we have been in the room.  Worktops will need to be kept clear of food & the kitchen bin shut. He loves his treats especially tripe sticks, gravy bones, Bonio & natural treats.

During the day Buddy chills out or sleeps nicely between his walks. At night he is given access to the occupied bedrooms, the landing, stairs & hall.  He likes to be near to his humans. He tends to settle on the floor at the side of one of the beds in the occupied rooms & on occasions if we’ve forgotten to shut the spare room door, he has sneaked a snooze on the spare bed, although mostly he is happiest being close to you.  He sometimes moves around during the night from room to room but doesn’t seem to go downstairs.  He is happy to go back to bed for a couple of hours after his morning ablutions around 7.30 am.

Buddy has been left in the house with the resident dog on numerous occasions for up to 2 - 3 hours & he has been fine. When he first came into foster, he would follow us from room to room however in a relatively short time this has decreased & oftentimes we will have to step over him to go elsewhere in the house.

Buddy knows some basic commands & is a very smart lad. (Smart enough not to jump on the bed when you are in the room & to jump off when he hears you coming back) He will sit – give a paw & leave a treat until told he can take it. “Wait & lie down” are a work in progress!   He doesn’t respond well to an overly firm tone of voice or being told off & will back away.

Buddy pulls very hard on the lead & isn’t easy to manage on a regular lead. He is now being walked on a GENCON figure of 8 head-collar.  He doesn’t much like this & will swipe at his nose & rub his face on the ground to try to get it off especially if walking on grass, although walking is a lot easier with the GENCON than it was with a standard lead. He is less likely to rub at his nose when lead walking around the estate & when there are no other dogs in sight & no grass.

Buddy’s recall isn’t totally reliable however if you have a ball, he will not leave your side. Balls trump other dogs – food & people.  If you don’t have a ball he will chase/play with other dogs. And if he’s having too much fun, won’t always come back when called.  He can be boisterous with other dogs which isn’t always welcome. Although over time this has improved.

Buddy has hip dysplasia.  If overexercised, when he gets up following a post-exercise sleep, he can be stiff & sore particularly on his left side. The amount of stiffness/pain correlates to the amount of & type of exercise. Buddy’s exercise has been increased over his time in foster & he now manages 15 – 20 or so minutes off the lead with a ball in the morning & a 20–30-minute lead walk at teatime without any indication of pain.  He has built up more muscle on his back end in foster & so long as his exercise is managed, he is a normal happy playful dog. He takes a daily joint supplement.

Prospective adopters must bear in mind that any issues around Buddy's hips will not be covered by insurance, so sufficient finances must be available to cover the cost of any operations, veterinary treatment and possible ongoing pain relief Buddy may require during his lifetime.

As an aside, Buddy is also allergic to Endogard Wormer.

In summary - Buddy is an adorable, loving, funny & mischievous lad.  There isn’t a bad bone in him. He has made us laugh every day. Because of his size & boisterousness, an adult-only or older teenage dog-savvy home only, preferably not too far from foster to enable introductions.  He needs a calm home. If he is around a lot of noise or excitement he will jump up & get mouthy & forget his manners.  And on occasions when we have had visitors, he has been so over the top & boisterous.

Ideally, Buddy would be better either as an only dog or with a calm, perhaps older / assertive, housemate who will put him in his place if he gets too boisterous.  In his previous life because of family circumstances, Buddy was often left alone for periods of time which had an impact on his happiness & behaviour.  Therefore, he needs a family who is home-based permanently & not just because of furlough. Buddy still has a lot to learn & needs a family who has experience with dogs & is committed to continuing his training.  Buddy would benefit from some focussed lead walking training.

Buddy is being fostered in Warwickshire. Please do not apply for him if you can't go and see him.

If you are interested in adopting Buddy, please email us in the first instance and tell us why you think you would be the perfect home for him. 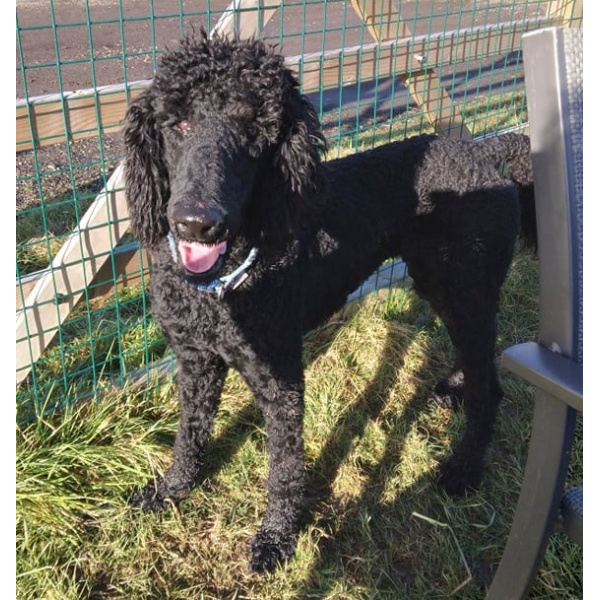